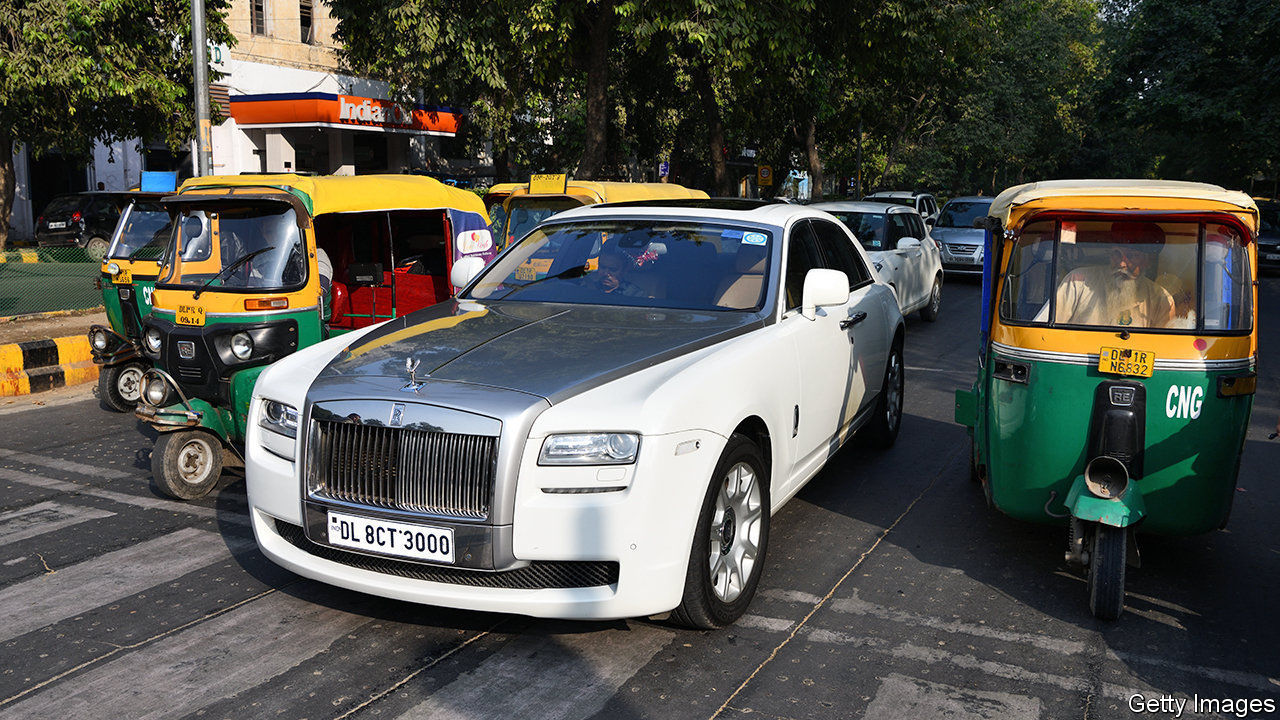 AT FIRST GLANCE the Indian names on the billionaires list compiled by Hurun Report, which tracks such things, reinforce the image of the powerful growing more so. At the top, to no one’s surprise, was Mukesh Ambani (worth $83bn), followed by Gautam Adani ($32bn). Both owe their riches to industrial conglomerates (centred, respectively, on petrochemicals, and ports and power plants). Both have a knack for navigating India’s obstreperous courts and bureaucracy. Both operate mainly in Maharashtra and Gujarat, the industrial heartlands in the west of the subcontinent.

Yet look more closely and the rich list reveals India’s changing economy. Mr Ambani’s wealth has soared because of Jio, his firm’s digital subsidiary which runs a huge telecoms network and has become an e-commerce prospect. Other members of the billionaire list increasingly represent the businesses of India’s future, including drugmaking and technology, rather than heavy industry. They come from across the country. And their ranks are swelling fast.

A record 50 joined Hurun’s list last year; only ten dropped out (see chart 1). India now has 177 billionaires, up from 100 in 2017 and behind only China (with around 1,000) and America (700 or so). Add the Indian diaspora’s 30 billionaires, and their combined wealth has nearly doubled over the period, to $740bn. Both the newcomers and the drop-outs tell a story of transformation.

Start with the deposed tycoons. Enough have been felled by charges of fraud to inspire Netflix to produce a documentary, “Bad Boy Billionaires: India”. Many others owe their relegation to struggles with excessive borrowing. Subhash Chandra, a rice trader turned media mogul, has stepped down from some of his posts. Kishore Biyani has seen the value of his indebted business, a retail empire called Future Group, dwindle. So has Anil Ambani, Mukesh’s younger brother, who has seen his $42bn fortune dwindle to a fraction of that over the past 12 years.

Fortunes built on physical assets are being overtaken by those fuelled by intellectual capital and consumer spending. Industries that used to mint tycoons, such as construction, are in relative decline. Twelve of this year’s new billionaires in India owe their status to drugmaking, bringing their number on Hurun’s list to 39. Nine peddle consumer goods.

The global surge in technology stocks has boosted software fortunes. Including the diaspora, IT now accounts for $95bn of Indian billionaires’ wealth, up from $30bn in 2016. The latest software moguls include Jay Chaudhry, who controls Zscaler, a cyber-security firm based in California with a market capitalisation of $25bn, and the family of Shiv Nadar, founder of HCL Technologies, an IT consultancy whose stockmarket value has doubled in the past year to nearly $40bn. Their ranks are likely to swell as more privately held companies valued at $1bn or more go public, observes Anas Rahman Junaid of Hurun, who tracks nearly 100 such “unicorns”. Two-thirds of these startups are based abroad, most of them in America.

Not all Indian moguls are entrepreneurs who founded successful firms. Especially in the diaspora, some are professional managers who have successfully run companies created by others. They include Thomas Kurian (a former Oracle executive who heads Google’s cloud-computing division), Jayshree Ullal (boss of Arista Networks, a cloud-networking firm) and Ajaypal Banga (former chief executive of Mastercard). They may soon be joined by Sundar Pichai, Mr Kurian’s boss at Google’s parent company, Alphabet, and Satya Nadella of Microsoft (with an estimated net-worth of $800m apiece), as well as Nikesh Arora, CEO of Palo Alto Networks, another big cyber-security firm.

Accomplished Indian executives may help explain why 41 foreign cities were home to Indians with assets of $150m or more in 2020, up from 14 five years ago. At home these ultra-rich still cluster in Mumbai, the commercial capital (see map). But their ranks are swelling faster in places like Chennai or Hyderabad. They can now be found in 70 cities across the subcontinent, compared with 28 in 2016.

Indian billionaires still make up a much smaller fraction of its 1.4bn people than fellow plutocrats in America, Europe and even China, which is roughly as populous as India but considerably richer. But if the country’s plutocratic makeover is a guide, at least the opportunities for great wealth appear to be spreading. ■

A History of Digital Radiography

Long-Term Care Planning: Then and Now