An exhibition was held to create a new image as the artwork moved as the audience moved.

The exhibition of ‘Random International’, which was noted for its experimental works, showed unique works that were completed only when visitors participated.

When a person is by your side, you will face the person in unison and follow the gaze of the mirror as you step.

At the same time as seeing the work, it is felt to be observed from it.

It’s like two hundred pieces of mirrors hanging on the walls, wavering as you approach them, the distortions and distortions of the images that the mirrors create, and the language you pass to the audience.

Standing in front of a huge canvas, a portrait of the spectator is completed in one minute, the light walking along the movement, and the shadows projected on the wall.

All of them are implemented through artificial sensors.

These are the works of artist group ‘Random International’, drawing attention for their experimental work.

Although the work is complete with the participation of the visitors, it also makes us feel the fear of modern people, like being watched by a living machine.

[Jeon Dong-hui / Paradise City Art Director: There is both anxiety that humans may be dominated by machines, or the expectation that they can surpass finite human ability.]

Intense and instant encounters from the machine.

As the participation of the viewers is the key, it seems that people can focus on humans rather than machines. 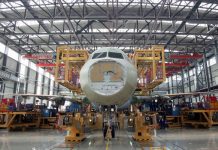 (Russia) Airbus may develop a non-polluting aircraft by 2030

Why Will You BUY A Home?

The case for managerial decency